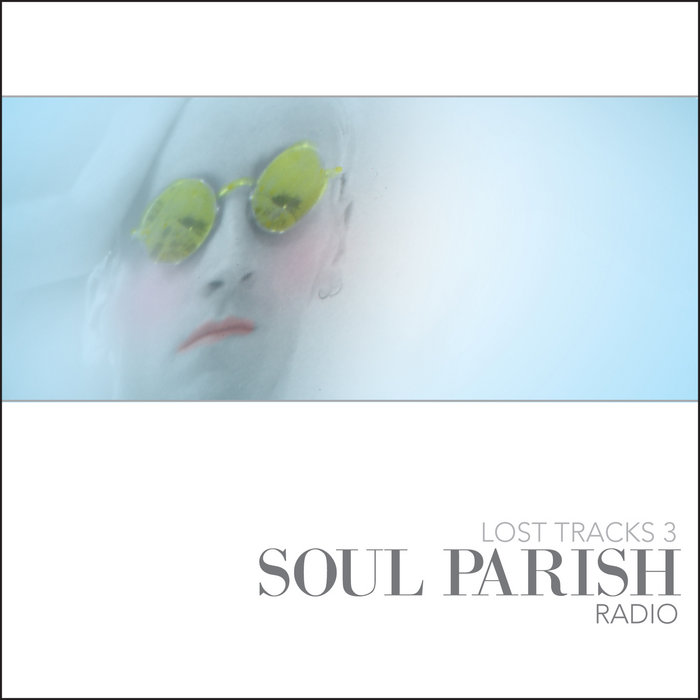 Ann Haroun I listened to the two free tracks from this album and immediately made the pre-order. "Radio" -- both versions -- are making me happy just listening to them! I do feel like I'm stepping back in time, in a good way! Your notes about this album are enlightening.

Soul Parish recorded in the Middle East, London and up and down the US West Coast through the late '90s. In 1992 Soul Parish made a radical shift into the Gothic realm on a full length CD entitled "Journal of Half Wakened Dreams." The CD was well received by underground radio and press, and the club single "Lilith," featuring an opera singer over drum machines, charted #2 in the German club scene.

The “Soul Parish Lost Tracks” series collects a handful of songs that were recorded in less-than-ideal circumstances, or never recorded at all, and offers them in the style and production imagined at the time they were written. Chase has faithfully referenced notes and lead sheets to create recordings that match the sounds (good and bad) with the sound of technology that would have been available at the time these songs were written. The result is a kind of time travel, making new recordings sound old, but also imagining what it might have been like to innovate with specific gear and producers in hopes of producing a popular record, or even a hit.

SOUL PARISH
Soul Parish was a studio idea. I wanted to make records using the recording studio as a playground for musical ideas—that's the legacy of the early recording artists. In the 80s, new technological innovations, MIDI, synthesizers, recording studio technology like the Aphex Aural Exciter and the Lexicon reverb unit, gave rise not only to new sounds, but new ways of thinking about making music. Every band sounded different and bands would spent days and weeks in the studio building the individual sounds that would become tracks and orchestral elements for albums like Japan’s "Tin Drum," or Eurythmics “Sweet Dreams,” or Heaven 17’s “Penthouse and Pavement.” These were the things that inspired me as a teen.

Soul Parish generated a long list of cassette releases that comprise the bulk of the "known" Soul Parish catalogue: Musical Boy Hero, Need, Ovation, Epic, Wintermaas, and The Lodestone (plus a short list of experimental recordings made under different names).

Soul Parish generated collaborations and new bands. Around 1996 Chase sang in the vocal ensemble Quorai a Vandalor which soon gave birth to the Gothic band Lodestone. At the same time, the only Soul Parish CD made “The Journal of Half-Wakened Dreams” was getting international attention. Not coincidentally, "Journal" featured vocals by Quorai a Vandalor band mates.


Soul Parish Lost Tracks 3: Radio
By 1983 a wave of gender bending British bands hit the world with video, new song forms, and constantly evolving new sounds. But by 1986, while the sounds were still fresh, they were no longer new. Every genre of pop was transformed.

In 1986, I was in London and in my flat in Chelsea I spent all of my time writing songs. When I wasn't writing or singing, I was listening to Aretha Franklin, Sam and Dave, Billy Holiday. And I was not alone. The club set who frequented Jungle and Taboo were listening to Frank Sinatra on the juke box, soul hits were never out of date, and that feeling made its way to the dance floor. Heaven 17 produced and sang back-up on Tina Turner's rendition of "Let's Stay Together" Eurythmics had already covered Sam and Dave's "Wrap It Up" (co penned by Isaac Hayes). In 1986, that's what I wanted to do: bring the old sense of soul to electronic club music.

Soul Parish Lost Tracks 3: Radio is the third and final installation of early pop by Chase under the Soul Parish alias. This last installment of the Soul Parish archives continue the realization of the songs I didn't have the money or tech at the time to produce. This particular cache of songs is more difficult than the rest because they embody Emperors and Empresses of early soul—the original project was called "Saints of Song" and (the only song missing from the original track list is a cover of “Centerpiece” by Lambert, Hendricks and Ross). “Saints of Song” was meant to be pure dance club, a collection of 12" singles that could hang together as an album.

The odd man in the collection here is "Radio." It was the second or third song I wrote for that first recording session in Damascus (in order, "Blue," then "Radio" or "Better Than This," followed by "Play By The Rules.") The song had pop-radio appeal, but not in a way I was comfortable with. I imagined it would be the first song I'd sell to another artist. It’s obvious in every recording that it doesn't fit with anything else in the Soul Parish catalogue. The vocal style was tongue-in-cheek even in that first studio session because I didn't actually like the song. Yet, somehow it must be an important part of the Soul Parish history because I kept going back to it. I intended to release it on Soul Parish Lost Tracks 2 with Electric Blue because the style is closely related to those first pieces, but I held it back because I wasn't happy with the same old vocal treatment, a tired reiteration of a bad idea. So I stepped back from what I had done and thought about what inspired me to write the song.

Those original ideas are highlighted for the first time in this 2021 release. The song was written in a few minutes, based on a riff. It was the riff—the 16th-note synth ostinato—that the whole song was supposed to hinge off of. Remembering that, I re-envisioned "Radio" from the point of view of a producer working to make it radio-ready, club-ready, and to present a consistent image of the artist recording it. How could "Radio" sit along side "Mercy"—even though "Radio" was written first, they came from the same musical mind and within a couple months of each other.

For the first time since I recorded it in 1986, this revision gives a completely reimagined vocal, more aligned with the image I was establishing at the time. The result is something slightly more mature, pop friendly, but leans toward the darker elements that lurk in the bulk of the Soul Parish catalogue. What's more, the extended mix is closer to my original concept for the song than the radio edit.

Lyrically, Radio manages to find an awkward place along side later songs. In revisiting themes from early Soul, I was discovering a lighter side to co-dependency in my lyrics. A draft of "The One Thing" included a now-lost line declaring "I've got plenty o potato chips." In "No Wrong" I offer my lover a credit card, and "Stranger Than Paradise" is more or less about a really great first date. "With Me" brings the whole narrative into the future-that-was-the-80s and flirts with sexual obsession as if it was, you know, normal.

I was looking for fun in my writing. Even if "Radio" doesn't find roots in 60s Soul, it is oriented around the kind of easy listening that made its way out of Soul into crossover R&B. The other songs maybe show more mature songwriting, but “Radio” captures some silly innocence that 13 year-old girls might have swooned over in 1985 (my sister who was 13 or 14 at the time confirms this). All said, it seems fitting to end the Soul Parish story where it began.

Originally from an unreleased EP "Saints of Song"